The best museum I’ve ever played.

Regardless of whether you grew up with an Atari 2600 or were born and raised in a world where Atari was ancient history, the impact of the company on video games, especially in the West, is immense. Maybe you could make the argument that someone else would have carried the torch, but if not for Atari, video games as we know them wouldn’t exist. That history is what makes the new video game collection Atari 50 fascinating. Celebrating the company’s 50th anniversary, it features more than 80 games, primarily from the 1980s, that help tell the story of Atari’s rise and fall. The games themselves might not have aged well, but the package they’re in is fascinating, offering up interesting and relevant context for why these games mattered and what their legacy is. 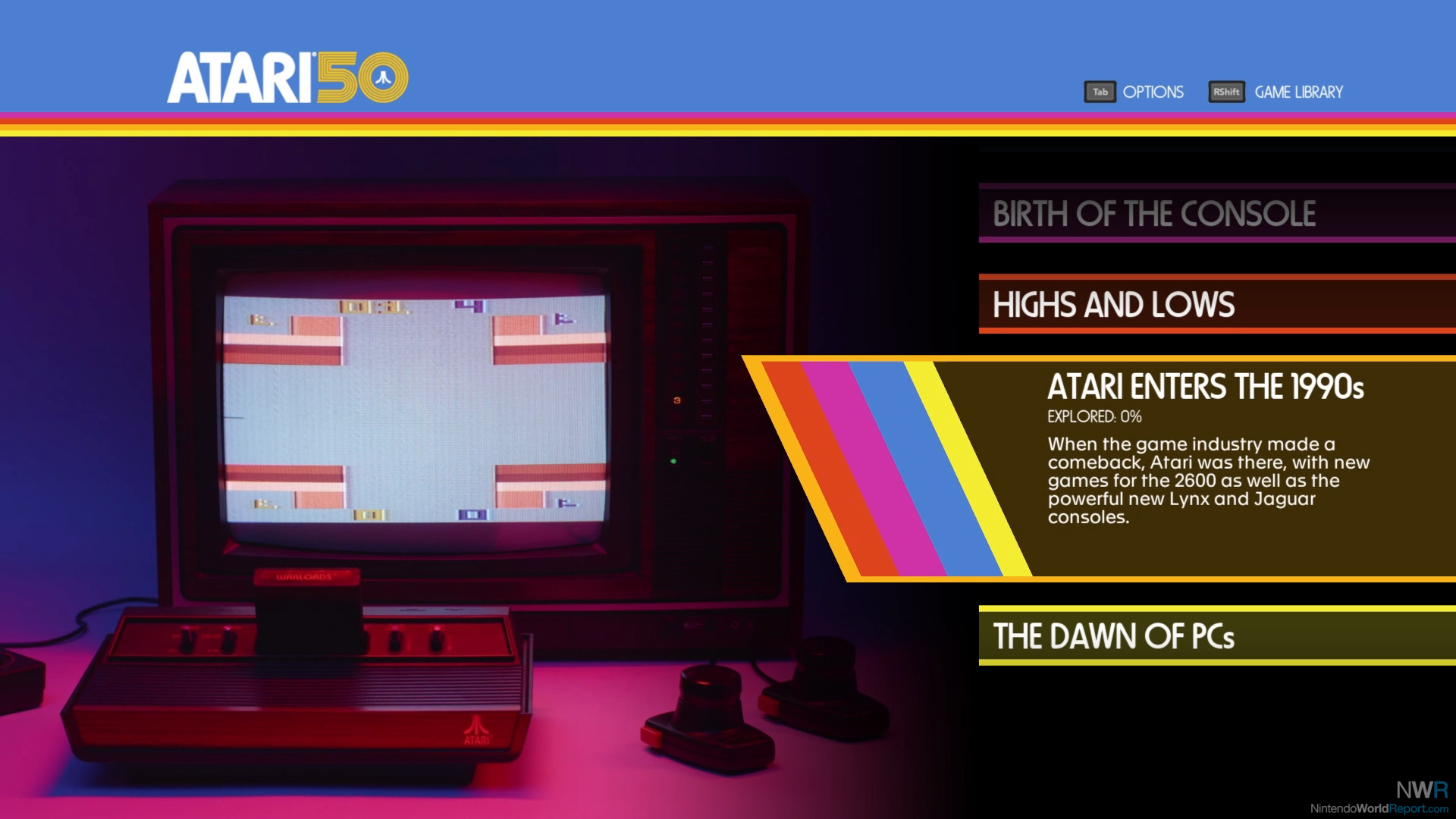 From the jump, Atari 50 presents its primary focus as a museum exhibit or interactive documentary. You aren’t brought to the list of playable games; instead you’re brought to a list of five timelines that tell the story of Atari, from arcade origins to ‘90s flameout. The meat of this package is that story. The timelines are engaging, packed with box art, advertisements, and more visuals. They also allow you to directly play a game being discussed and when you’re done, you can return right back to where you were in the timeline. The coolest part to me though is the variety of interviews with Atari luminaries ranging from Yars’ Revenge creator Howard Scott Warshaw to Swordquest creator Tod Frye. Their stories are fascinating, packed with great anecdotes and amusing quotes. My personal favorite video is the one about dispelling (or proving) the myth that all the Atari devs did drugs. But aside from that bit, it’s also cool seeing Warshaw and Frye detail the origins of their best-known works.

Atari 50 is exactly what I hoped for in that I left my experience with this game having a fuller picture of what Atari was and why it matters. I have a greater appreciation for the trailblazing nature of the company. If this was a game that just had a port of the 1982 game Adventure, I’d probably roll my eyes and not bother. Instead, it provides the context for why Adventure is hugely influential and allowed me to better appreciate this brilliant old game that Nintendo fans might label as a proto-Zelda. 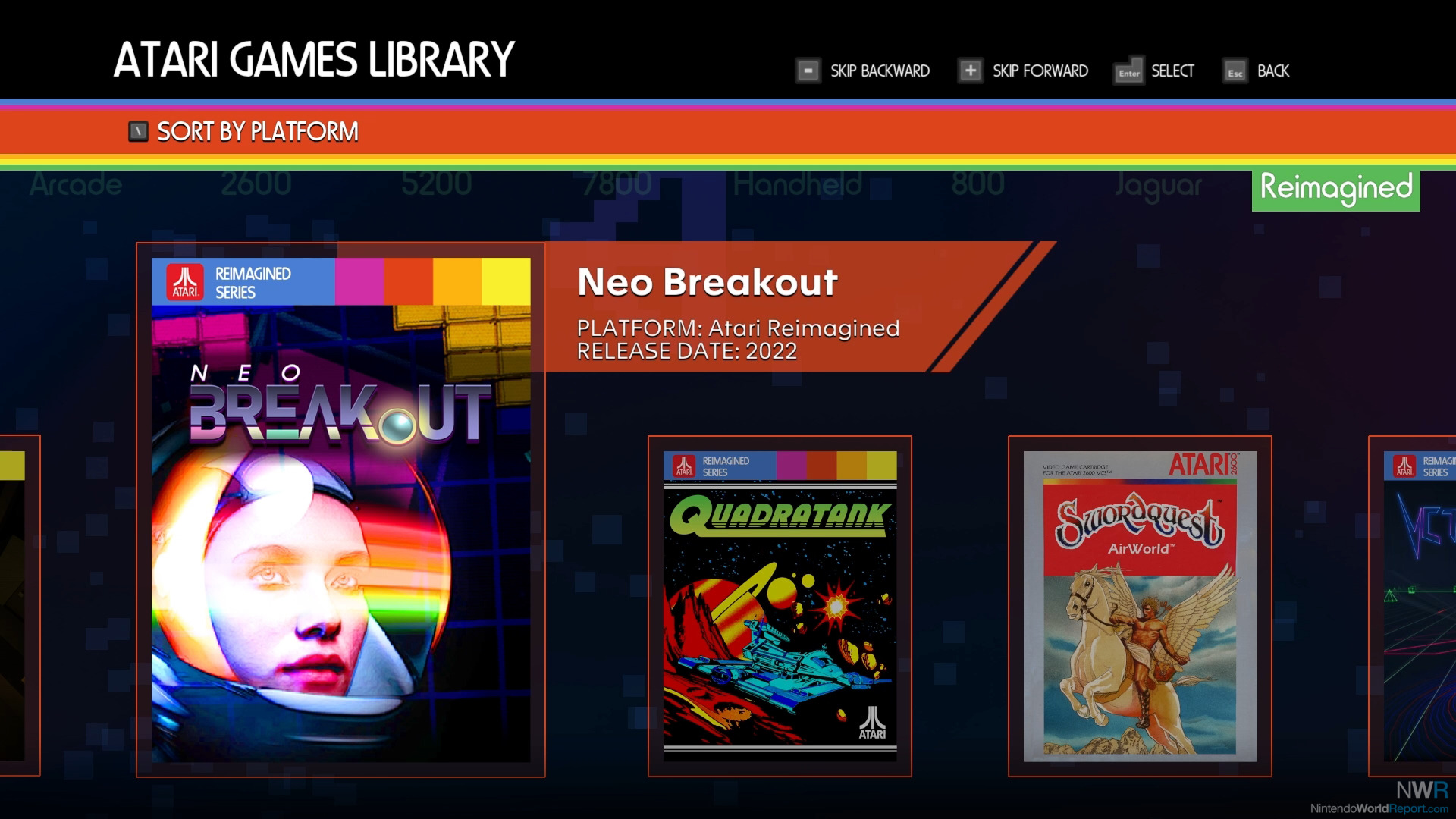 Aside from the ‘80s ambition and the knowledge of how groundbreaking some of these games were, I don’t think a lot of them are all that good in 2022. If you have nostalgia for these games, then you’ll be in heaven because this is the best they’ve ever played since they came out. It’s neat playing Asteroids, Centipede, and Basketbrawl, but they’re more curiosities than anything I’m going to sink hours into. Even some of the ‘90s games on Atari’s handheld Lynx and final home console Jaguar aren’t terribly great. Atari Karts is a cute kart racer, Ninja Golf is an outrageous concept, and Cybermorph is a neat shooter, but overall it’s a smattering of games that are more interesting than they are good.

The best part of the game selection are the handful of Reimagined titles that are newly created for this collection. Vctr Sctr is a loving pastiche of Atari’s vector graphics games, which includes the only real reference to Battlezone. If you don’t know, Battlezone is a classic Atari game that sadly isn’t present here because another company owns the rights. The licensing issues actually prevent a handful of notable games from showing up here. Another Reimagined game is Haunted Houses, a voxel rendition of the early survival horror game that is incredibly fun to mess around with. SwordQuest: Airworld is the planned fourth game in the series that was never made but the team at Digital Eclipse used notes from 40 years ago to make the end of the quadrilogy. Yars’ Revenge Enhanced shows the quality of the original because all it is is a fresh coat of paint on the game without any other changes. In general, the Reimagined games are superb at taking the best concepts of the dated older games and making them absolutely sing in the 21st century. 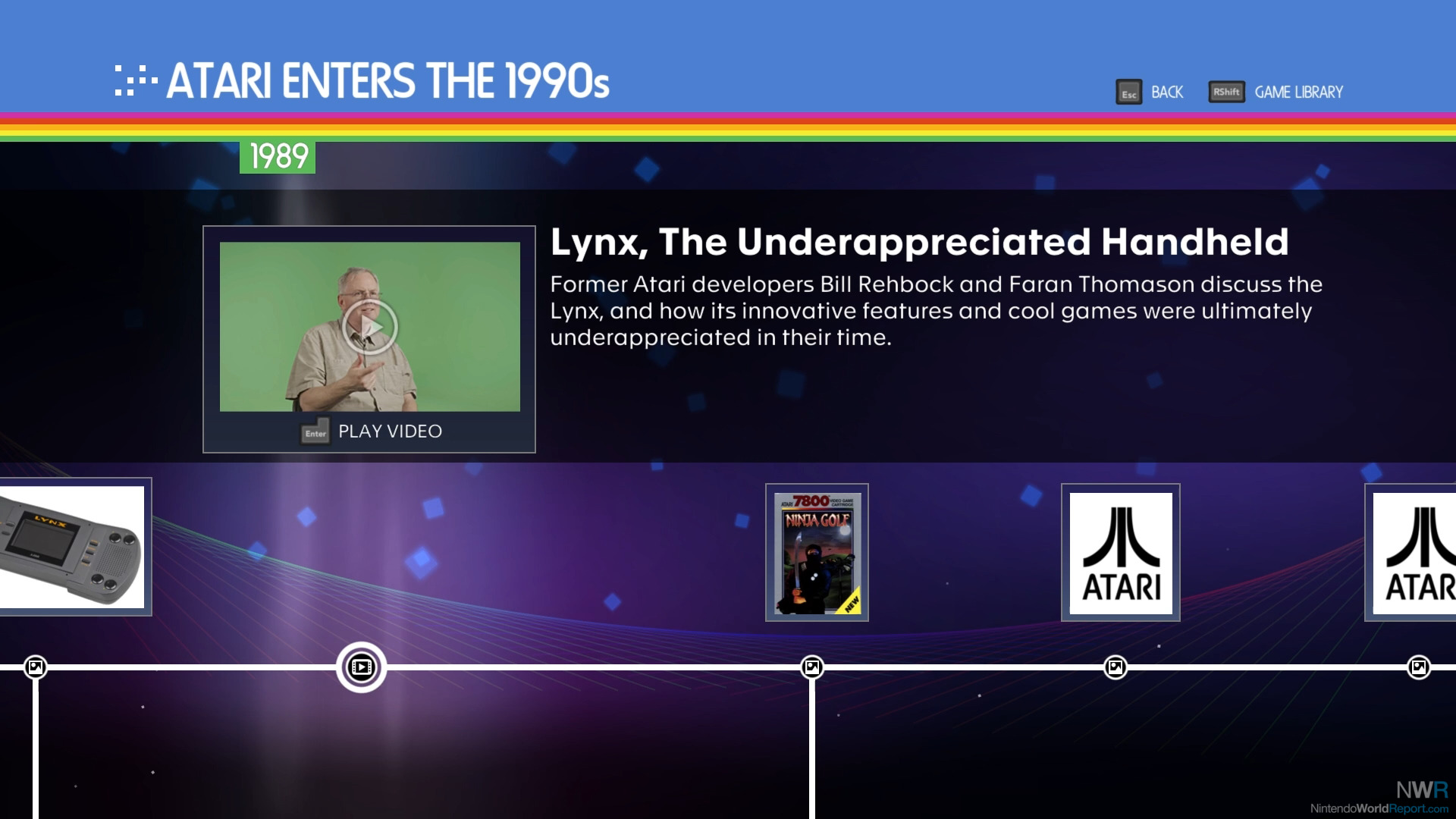 As an interactive timeline and a virtual exhibit, Atari 50 is unparalleled. No other historical collection comes close to how awesome this is as a context-rich story (the only ones that do are also from the same developer). I hope that this style of giving historical context and not just presenting a list of 40-year-old games without any explanation is the trend going forward for packages like this. Even if I’m not chomping at the bit to play some RealSports Football, I’m thrilled that I now know its place in the grand history of Atari. 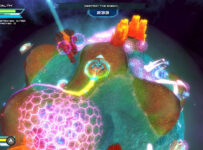 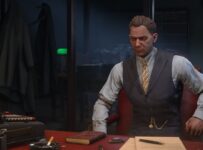 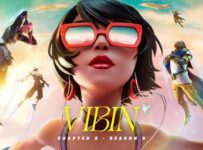 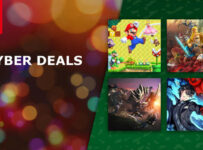 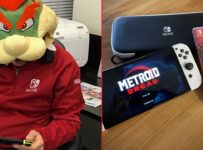 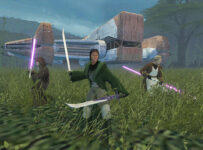