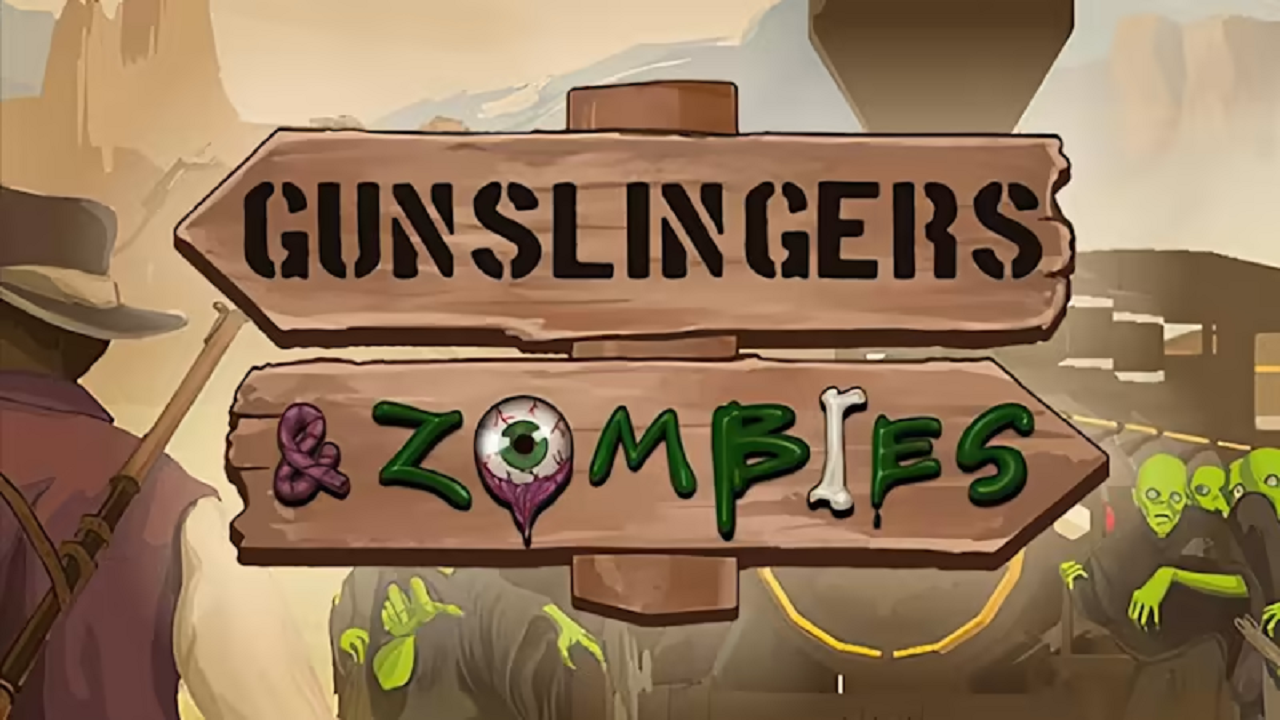 Gunslingers & Zombies, out now for the Nintendo Switch, places you in the boots of a group of wild west ranchers, fending off a zombie invasion. It kind of puts a new spin on the term “ghost town,” eh?

Each stage in the game starts off with a few still images with dialogue to move the basic plot along. The story, while not very deep or engaging, does its job well enough and gives you a general idea of what your goals should be during each round. But the long and short of it is this: there are zombies in a town, and these remaining survivors have to escape. It’s simple, but it works. 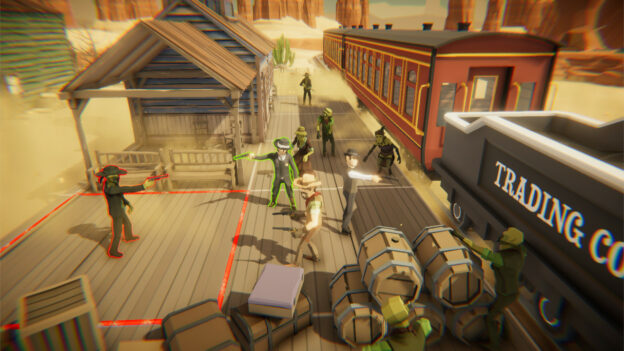 As for the rounds themselves, the game plays like a strategy RPG. Picture games like Fire Emblem or Mario + Rabbids: Kingdom Battle and you’ve got a good idea of how Gunslingers & Zombies works. You are in charge of a number of the aforementioned gunslingers, and you need to strategically move them around the map in order to escape this army of the walking dead. The levels all have pretty unique requirements. In some, you just have to wipe out the zombies. In others, you will need to gather 10 bags of loot and make it to the exit. There’s also a level where you need to start up a mine cart full of explosives and survive as it slowly makes its way toward its target. 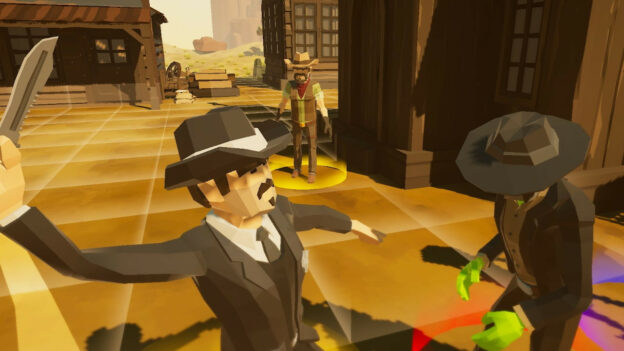 Each character has two “actions” per round; you can use an action to move a certain number of spaces, attack, heal, or reload your weapon. You also have different weapons and a knife for close-range attacks. This mechanic forces you to really think about what is needed to achieve your goals. Should you use both actions to move very far up the map in order to reach the exit? What about those three zombies that are huddled around that explosive red barrel (also a video game staple)? Or can I just hold a defensive position and auto-attack a zombie that comes near me during their turn? There are many different ways to plan your moves, and this really adds a tactical element to the game.

Once your turn is over, the zombies get their opportunity. There are different types of enemies, such as your standard zombie, explosive zombie, long-range attack zombie, and a zombie that splits into two smaller zombies when killed. Each has its own attributes, and again, you need to plan both attacks and defenses. The AI is pretty standard for this type of game and works for the most part. I did have one instance where a zombie attacked a piano for an unknown reason, but hey – it used its turn, so I didn’t complain. Plus, they’re zombies – there’s not a lot going on upstairs, anyway. There are three difficulty levels as well, so you can tailor the experience to your needs. 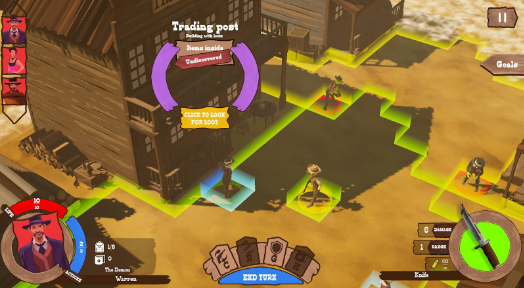 Graphically, Gunslingers & Zombies isn’t anything spectacular, but again, it works for what it is. You’ll get basic, almost voxel-style polygons, and the characters have no faces or personalities. Zombies, too, are just the same model with some visual differences in the zombie types. The maps are pretty sizable and fit the old west theme well enough. The music is just background ambiance, and the characters and zombies re-use the same vocal “ugh” whenever they are hit.

Controls also work well enough. You can move the camera across the map to check the layout and zoom in and out. It’s easy to select your weapon and action, and the game does a good job of helping you out with in-game tutorials. I did have some issues selecting my character on the map due to an awkward camera angle, but it just required a little fine-tuning. The only real issue with the controls was that they are too floaty. In a grid-based game, I would expect to see a “snap” system where your cursor quickly moves to the next spot you are pointing towards. 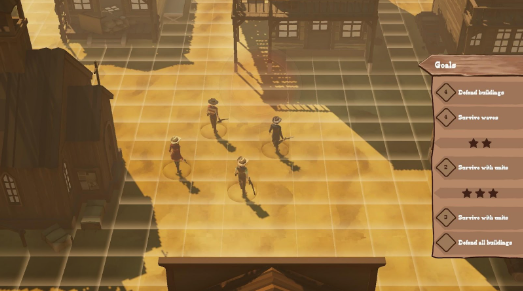 There are some other minor issues with Gunslingers & Zombies. First, the writing is rife with grammatical and spelling errors. Sometimes I couldn’t really understand what the characters were saying until I read the dialogue a few times. There was also no way to reset the round. Oftentimes I found myself in a no-win situation, only to have to constantly skip my turn so I could get slowly attacked and killed by my enemies so I could start over.  I could exit the game and restart it, but a quick reset would have been useful. Finally, the knife is way too weak. One would think a melee weapon in a game like this would be a bit stronger, as you would use it sparingly. This weapon only did 1-2 damage per attack, and I resorted to using my rifle even when I was only one square away. While annoying, these concerns do not ruin the game – they just make it a tad frustrating.

Don’t judge Gunslingers & Zombies by its cover. It may not be as deep as Fire Emblem or as flashy as X-COM, but for the most part, it accomplishes what it sets out to do. Once you get into it, you’ll unearth a fun and relatively appealing tactical RPG that manages to make you think and strategize, but not too much so that you can’t have a relaxing time with it. In fact, I found it a perfect companion to having a football game or some music on in the background.  This also could be considered a halfway decent entry-level game in this genre (at least on the easy setting). If you can make it past the script issues, basic presentation, and gameplay annoyances, you’ll get a few hours of enjoyment out of your $8.99 investment. 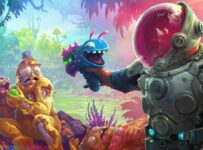 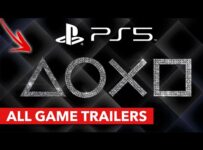 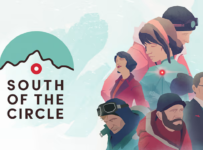 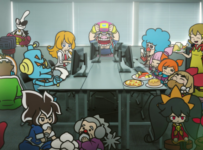 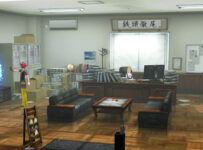